What’s the best sleeping position for a baby? Simple question, yet even here you might get various answers from different health professionals.

Here, in the UK, it is widely recommended that babies should sleep on their backs. Ever since I became pregnant, I read everywhere that’s the safest position for a baby’s sleep. Plus, the midwives, health visitors and other health professionals have only confirmed this. You read about the Sudden Infant Death Syndrome (SIDS), and it scares many new parents more than anything else.

I got so many leaflets about safe sleeping during my pregnancy that there was only one sleep position for my baby once she was born. And that was on her back. Full stop.

This advice which significantly reduces the chance of SIDS makes perfect sense to me, so why is it that some health professionals encourage new mums to choose alternative positions such as on their sides? We’ll hear some of the arguments a bit later.

As I said, my baby has been sleeping on her back since she was born. She is almost nine months old now, and it’s only recently that she started sleeping on her tummy as well. Not because I place her like this, it seems to be her preferred position now that she can easily roll over from back to front. My initial reaction when I first saw her dozing off on her tummy? Firstly, I checked if she was breathing (oh yes, I did that), and then I wanted to turn her over to her back. To say that she wasn’t happy about it is an understatement.

I knew that she should be just fine on her belly now that she can move more freely, roll over and lift her head with ease but deep down I still worry a bit seeing her in this position.

Am I paranoid with all the information that’s available about SIDS? Let’s get back to the beginning.

Back, tummy, or side? What are the arguments?

When my family came to visit us when my baby was born, my mum told me that sleeping on the tummy is better for her. When I tried to explain all this stuff about SIDS, she didn’t even know what it was.

You see, when my parents’ generation had babies, it was very different then. They placed babies on their tummies for sleep, without any worry about SIDS. In fact, as my mum said, they worried more when babies slept on their backs. Why? They worried that babies could choke to death on their spit-up or vomit and their head can become flat.

As I said, here in the UK and many other countries, it is now advised to put your baby on his back when sleeping. The main argument is that it reduces a chance of SIDS significantly. In fact, since 1992, when the American Academy of Pediatrics recommended all babies should sleep on their backs, as opposed to on their tummies, the rate of SIDS in the US has decreased by 40{bba43082c5342574fbaac8145d42b23fea8caa24e0a6407cfc56a50334b7d81e}. That’s huge, right? 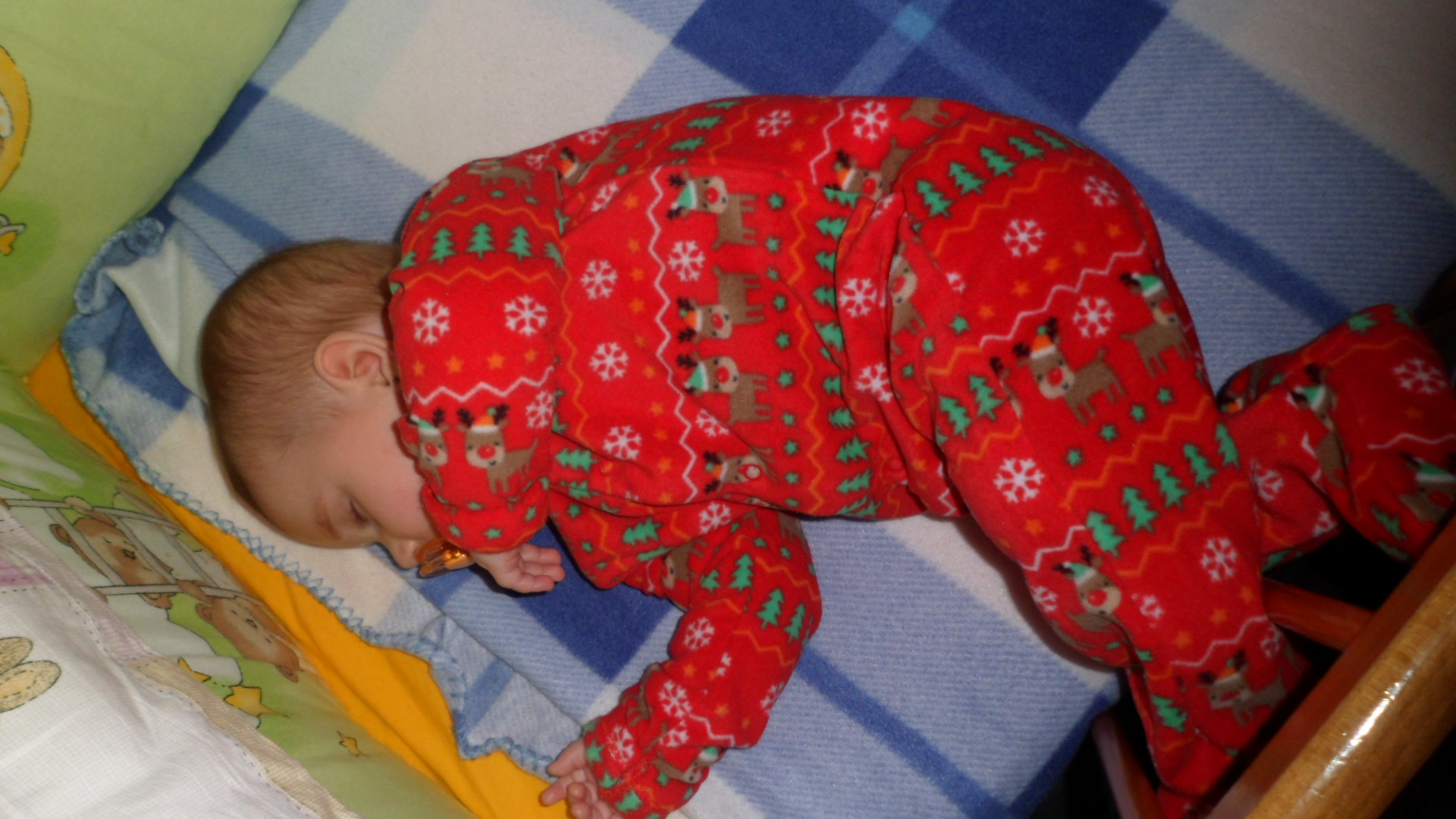 So, I was slightly surprised when I saw my sister in Slovakia placing her newborn baby to sleep on his side. She said that’s what they told her to do in the hospital. Really?? What’s their argument? To prevent a baby choking up to death. Here we are, the choking issue yet again. Oh, and babies should sleep on their side rather than on their back, alternating positions from right to left, to prevent them having a flat head.

That’s what my mum was telling me to do as well, ‘Don’t let her sleep on her back too much because she will have a flat head’.

However, my baby was able to turn her head from one side to another since she was born. She always positioned her head to a side without any difficulty. I didn’t have to change the position of her head because she was sleeping on both sides, so I didn’t worry too much about the flat head problem.

Although, I wish they have explained the possibility of a flat head in the hospital. It might seem like common sense, but with all that’s going on with a newborn, it didn’t even cross my mind, until my mum pointed it out.

You can see the pattern here. Flat head syndrome and choking seem to be the main issues with sleeping on the back. While you have some control over developing flat head by alternating baby’s head from one side to another, what about choking? That’s a lot more serious problem.

How likely is it to happen when a baby sleeps on the back? Well, you may be surprised to learn that sleeping on the back is actually the safest position for a baby when it comes to the potential choking issue.

Confused? Let me explain. When a baby is in a back sleep position, the airways are located above the food pipe. So, if any milk is refluxed, the baby can easily swallow or cough it up. It would work against gravity for the milk to get up to the respiratory tract. Here is a perfect illustration of this.

So, who should I listen to when it comes to the perfect sleeping position for my baby?

My mum has raised three children, and we are all doing pretty well, I think. Still, we shouldn’t ignore the research and evidence showing a significant decrease of SIDS.

Back to sleep is best

Sleeping on the back is without a doubt the safest recommended sleep position for babies.

On the other hand, sleeping on the tummy is the riskiest position because of the possibility of a breathing difficulty. However, sometimes babies just won’t sleep on their backs, like my friend’s baby. He was only a few weeks old when he started sleeping on his tummy. Don’t worry too much; there’s no need to panic if that happens to you. I would still try to negotiate with the baby first, but if he isn’t budging, it’s crucial to follow other guidelines of safe sleeping. The position is only one aspect of safe sleeping for babies. I won’t go into detail, but you can read about it here.

Side sleeping also isn’t ideal, because babies can occasionally roll on their tummies. It remains a mystery to me why certain health professionals in some countries, in this case, Slovakia, will advise different sleeping position other than the recommended.

Although it’s also encouraged to put babies on their back till they reach their first birthday, once they start rolling, you lose some control over their sleeping habits. It may freak you out at first, but there’s no need to worry and put them back on their backs. By this time, the most dangerous period for SIDS to occur has passed. The vast majority of SIDS deaths happen in the first six months of baby’s life.

So, I’m slowly getting used to my baby being more independent. I still lay her on her back all the time but she now definitely enjoys her freedom of movement.

What’s your baby’s sleeping position? Get in touch with your comment below.