My recent almost a month-long holiday to Slovakia went rather quickly. So, it’s back to the UK now. I could say that after twelve years of living here, it’s like my second home now, but there are still and always will be many things I miss about my home country. And I’m not talking about family and friends. That’s obvious. As is the food or the stunning nature you can experience in Slovakia. I have previously written a post about the things I love about my home, which you can read here.

But today I’m talking about some less common, less obvious, somewhat unexpected and weird stuff that I really miss from home sometimes. What are they? Stay tuned to find out.

They both come from the same village, called Osturňa, where people still live in the original village development. Consisting of wooden houses (farmyards), with the front house used as a family living space and at the back there is usually a barn and a stable for animals.

We used to spend at least a couple of weeks every summer holidays there, together with our grandparents and cousins and I have some fond memories from there.

Even now, long after our grandparents have passed away, we go there to see family members that still live there or just for a day out, have a barbeque and come back home in the evening. I love to visit this place every time I go to Slovakia. Apart from my home, this is one of my favourite places in Slovakia that I miss terribly.

I never thought I would appreciate Slovak weather as much as I do now. That was until I arrived in the UK. Back home we have winter, summer, spring and autumn. Here we have rain, cloud, and then rain again.

Ok, let’s be fair, we do get few days of extreme heat and sunshine, aka the great British heatwave, but that’s as far as the summer in the UK goes. Winters? What winters? Snow is rare (apart from Scotland maybe), and if we are ‘lucky’ enough to get some, it just melts on the ground before it even settles. And then with a little bit of snow everything comes to a standstill. Trains, planes, roads, schools, everything just stops.

Winters in Slovakia are proper winters usually with a lot of snow and temperatures way below the freezing point. Yeah, I do miss those frosty mornings in winter. Summers in Slovakia are, well, not exactly like in Mediterranean, but pretty decent. Temperatures above 30°C are becoming ever so common, and the heatwave can last for weeks. 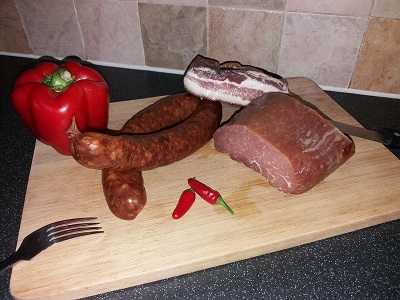 I know, I know, a bit random. But here’s why I miss our sausages. I miss Slovak food in general and especially my mum’s cooking, but luckily, there are now Eastern European shops in the UK on every corner.

So, it’s super easy to get a lot of the Slovak food and ingredients from these premises. But there are still some vital things I can’t get anywhere, and that’s our sausages, bacon and any smoked meat. I tried several different sausages and meats from these shops, but the taste is not the same as ours.

We just love these products, and they are pretty much an essential part of many Slovak households. I always bring lots of these every time I visit Slovakia and just put some in the freezer for later consumption.

Now, those of you who experienced it first hand, before you jump and shake your head in disbelief that I listed customer service among the things that I miss, let me explain.

No, I don’t miss the grumpy waiters, waitresses and I certainly don’t miss the fact that you are reminded very politely, of course, what time the restaurant is closing. God forbid you stay few minutes after their closing times. Everyone, who’s been to Slovakia will probably tell you that the customer service is not great.

Of course, there are exceptions, and I don’t want to offend all the friendly and polite staff there is. So no, it’s not all bad. Let me also say that I don’t really blame the staff themselves. In many cases, it’s down to management and working conditions. But enough about that.

What I miss is the table customer service. You get table service in the UK, but that’s mainly in restaurants. When you go to a pub or coffee shop, you need to order at the bar. It doesn’t really bother me, but when I come to Slovakia, I feel like royalty whenever I get served at the table at these establishments.

Wouldn’t it be nice to get this treatment in the UK too? To just sit, relax and wait for your drink to arrive? Ups, I almost forgot. There is nothing relaxing about having a sixteen-month-old child in a tow everywhere you go. Never mind.

Without sounding too braggy, I think that my English is pretty good. Ok, decent. That being said, I will never speak and understand the language same as locals do. It will always be a second language for me, no matter how fluent I become.

Have you ever found yourselves in these awkward situations when you can’t join in the conversation because you have no clue what the people are talking about? It might be a different British accent, or they are talking too fast, or they are using some slang words you’ve never heard of. Yep, I’ve been there. Many times.

Even after so many years of living here, there is still this language barrier, and I’m not sure it will ever disappear. So, this is another thing I miss when I find myself in situations like these. A simple thing like fully understanding a conversation.

I have become a massive football fan since I came to the UK, thanks to my other half. However, ice hockey will always be a number one sport for me. Winning the World Championship in 2002 seems like a distant memory now, but everyone in Slovakia probably remembers that dramatic final win over ice hockey superpower Russia. And the celebrations that followed, oh my, literally the whole Slovakia went crazy. The good old times.

It’s a shame that it all went downhill for Slovak ice hockey since then. We used to take so much pride whenever we beat our Czech neighbours. Nowadays we are lucky if they beat us ‘only’ by a one-goal difference.

Nevertheless, I still miss the possibility of being able to watch an ice hockey game or tune in every April/May during the World Championship.

Even after twelve years of living in the UK, I still can’t get my head around the British system of weights and measures. Stones instead of kilograms, yards instead of meters, then there are pounds, inches, foot and other mystery names for such simple things like weight, distance or height.

Trying to figure out whether the baby was small, big or average when another mum tells me her daughter’s birth weight was 6lb9oz was almost mission impossible at first. I’m getting better though. Now I have at least a rough idea when the weight is concerned, but don’t get me started on distances or height. A long way to go.

I miss the simplicity of not having to think so hard about these once basic and straightforward things.

Do you have some surprising things that you miss from home when you travel or live abroad? Let’s hear them.